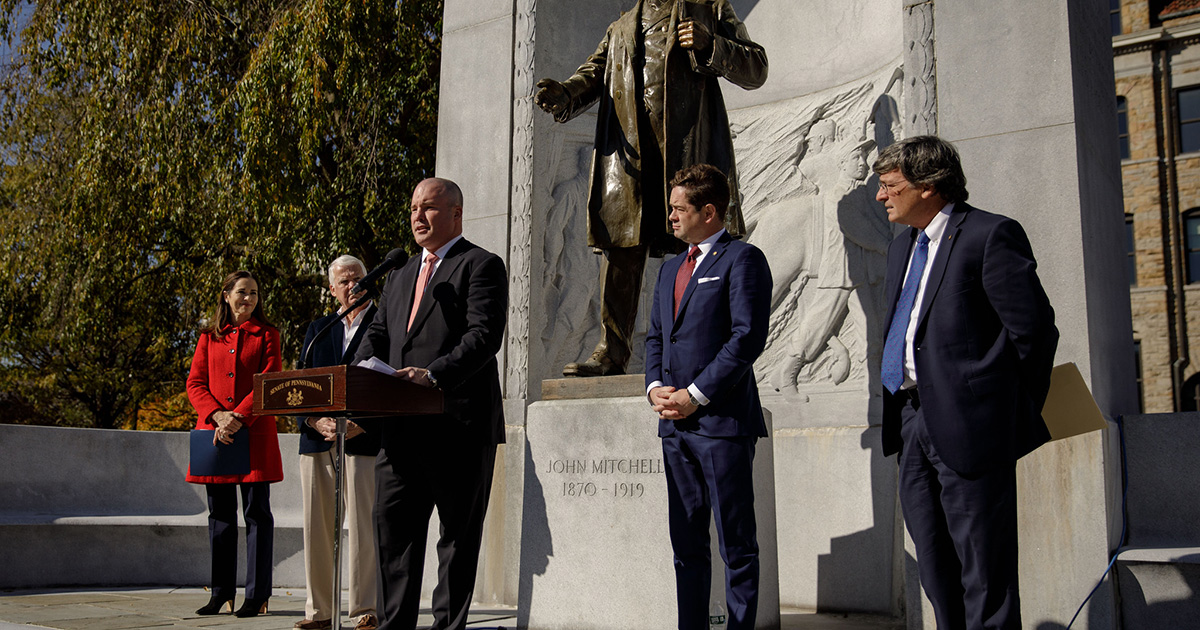 Lackawanna County − November 5, 2021 − Senator Marty Flynn was joined by local state representatives today outside of the Lackawanna County Courthouse to discuss the ongoing strike of the Scranton Federation of Teachers. Flanked by a raucous crowd of Scranton School District teachers, paraprofessionals, faculty, and their supporters, Senator Flynn, Rep. Kyle Mullins, Rep. Elect Thom Welby, Rep. Bridget Kosierowski, and Rep. Mike Carroll fittingly stood in front of the John Mitchell Statue to show their support for the Scranton Federation of Teachers in their labor dispute with the school district’s administration.

“I’m proud to stand here today, not just as your State Senator, but as an AFSCME (American Federation of State, County, and Municipal Employees) brother,” Senator Flynn began. “I’m proud to have my colleagues here with me. We’re all on the same page here; we all agree that our teachers are not the problem.”

Senator Flynn went on to admonish the administration’s attempts to solve their issues by cutting successful, popular programs in the district. “The administration made class sizes larger, which placed an even greater burden on the teachers,” Senator Flynn said. “They cut art. They cut music. They cut preschool. They cut counselors for students in elementary school. You can’t cut your way to prosperity. You can’t cut your way to recovery.”

Rep. Elect Thom Welby used his own personal experience as a student in the Scranton School District to highlight the negative impact the program cuts could have on the city’s children, highlighting his experience in the now-cut theatre program and crediting it for “helping so many children become fine, upstanding adults.”

“I got involved with the theatre group and with some of the arts groups, and my exposure to the arts literally changed me as a person, that brought me out of my shell,” Rep. Elect Welby said. “It’s so important to our students. We need exposure to the arts from Pre-K all the way through high school.”

Rep. Welby was followed by Rep. Kyle Mullins, who noted that the lack of proper funding for the school district has led to its current situation. “Decades of insufficient funding from the state to school districts like Scranton has set teachers and district management on a collision course,” said Rep. Mullins. “While I’m committed to ending this disparity, this unfairness, we need students back in the classroom with teachers who were put on this earth to care and to teach, teachers who deserve health care and pay comparable to other school districts.”

Rep. Bridget Kosierowski commented on the administration’s decision to suspend teachers’ and paraprofessionals’ health insurance during the strike. “When I say I believe health care is a right and not a privilege, I don’t just mean it as a campaign slogan every two years; I actually believe it,” Kosierowski said. “As a registered nurse of more than 25 years, I saw firsthand the cracks in a broken healthcare system, but never did I think I would see the day that restricting healthcare access would be used as negotiating tactic and a bargaining tool. It is not only cruel, but it is simply immoral.”

Finally, Rep. Mike Carroll laid out a plan to get the district out their current state of crisis and into a position of greater financial stability. “There are three things we need to do: Reinstate health insurance, negotiate a contract for the teachers that is aligned with other Lackawanna County school districts without offsetting healthcare savings, and reduce property taxes by 1%,” Rep. Carroll said.  “We know this is in conflict with the recovery plan, but no recovery plan can substitute for the more than $30 million annual shortfall from the state.”