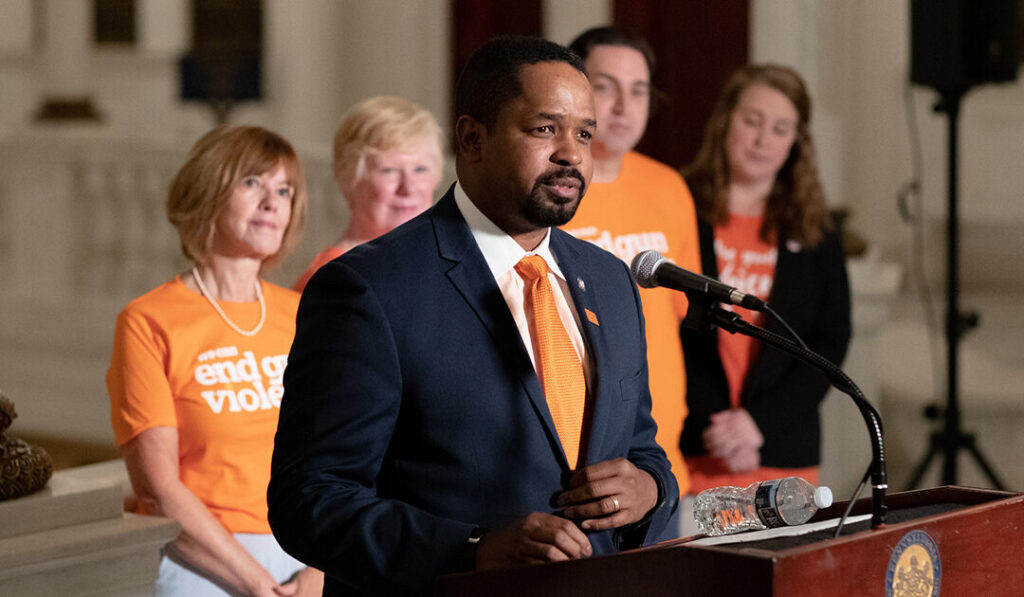 Every day in America over three hundred people are shot.  On Tuesday night 18-year-old Nasir Marks was fatally shot multiple times in West Philadelphia at around 7:30 p.m. A half-hour later, just before 8 p.m., a 15-year-old boy was shot and killed in my district in North Philadelphia. On Wednesday morning a mass shooting left a total of 10 people dead in California. Gun violence dominates the news cycle and threatens to numb us to routine reporting of loss of life comparable only to the pandemic in its infancy.

I saw a blatant example of this disregard for human life just this week when Philly Weekly dabbled in blood sport, asking readers to guess how many people will be murdered in Philadelphia this year. Even more repulsive, they offered the “winner” of this “contest” a prize described as “sweet swag” if they guess correctly. What a disgusting way to touch on an issue that represents lost lives, devastated families and communities that are living in fear. Nowhere in their coverage did they offer any detail about the communities being affected by this rampant gun violence, factors that are exasperating the issue, or one coherent thought about solutions.

Hundreds of people will be shot today across America, and then tomorrow it will likely happen again. We hear declarations of thoughts and prayers in place of policy and thoughtful deliberate action. Communities struggle to cope with a cycle of trauma while generations are lost to routine violence.

Gun violence is a public health crisis that is plaguing cities nationwide. It is a serious threat to the well-being of our cities and future of our youth. At the end of 2020, Chicago police reported more than 750 murders, a jump of more than 50% compared with 2019. Los Angeles’ 2020 murder rate was up 25% in 2020. In New York City, there was a 97% increase in shooting incidents and 44% increase in murders in 2020.  And here in Pennsylvania, the trends are similar. Philadelphia has surpassed 200 homicides for the year, up 36% from this time last year. Pittsburgh has had a 90% increase in shootings this year.

Most deaths by gun violence happen in black and brown communities. According to the Centers for Disease Control and Prevention, Black males between the ages of 15 and 34 accounted for 37% of gun homicides, even though they made up 2% of the U.S. population — a rate 20 times that of White males of the same age. The Violence Policy Center’s latest study shows Pennsylvania ranks 7th for Black homicides and that guns accounted for nearly 90% of them.

As a community member, I’m devastated. As a lawmaker, I’m frustrated at the lack of movement on gun reform. As a father and grandfather, I am fearful.  Our communities are in crisis, yet policy in Harrisburg and DC remains stalled or nonexistent. Gun violence does not have to be an inevitable reality of our world. We know there are evidence-based practices as well as common sense legislation that can flip the trend of growing gun violence in our communities. We need to get ghost guns off our streets. We need to remove background check loopholes. And we need to implement red flag laws that can remove guns from the hands of individuals who may cause harm to themselves or others.

Sustainable change also requires us to prioritize prevention efforts, especially among youth. Gun violence rates are largely driven by factors like poverty, addiction, and trauma. Investing in community programs and spaces, gun safety education, and mental health and addiction services will target systemic gaps that ultimately lead to gun violence. Taking a preventative rather than solely reactive approach to the gun violence epidemic can make all the difference for our children and communities.

Collaboration from government, business owners, community leaders, and community members will allow us to address this public health crisis head on. Recently I joined Senator Williams, Governor Wolf and AG Shapiro to meet with law enforcement, local state leaders, community advocates and Mayor Kenney to commit to a coordinated effort at every level of government along with consistent investment in violence prevention advocates to reverse the routine violence our communities face. We have begun the hard quiet work.

The conversation on gun safety and reform often gets muddied with political leanings and “picking a side.” Yet when we hear from Americans, gun law reform is widely supported. A majority of Americans want to see gun laws strengthened.  96% of Americans support universal background checks for gun purchases. 88% of Pennsylvanians support stronger background checks. This is not an issue of Progressive vs. Traditional law enforcement. We see both Democratic and Republican led areas grappling with the growing threat and destruction of gun violence. And Pennsylvania’s own electorate recently rejected the idea Progressive ideals limit a city’s ability to overcome gun violence by electing Larry Krasner as our Democratic nominee for Philadelphia District Attorney.

Let me be clear, the focus of common-sense gun reform is not about banning guns. It’s about getting a better reign on the guns that are out in our communities and who has access to them.

I’m ready to collaborate with all my colleagues in Harrisburg- Democrat, Republican and Independent- as well as community leaders and constituents. Let’s not become numb to the disturbing news and data that continues to reflect the plague of gun violence across our country and in Pennsylvania and condemn grotesque displays like Philly Weekly that trivialize and mock the murder rate of Philadelphians.

Systems are perfectly designed to yield the outcomes they produce. If the results of our system are bad, we need to change it. Enough with the thoughts and prayers. As we saw with the COVID-19 pandemic, responding to a public health crisis requires swift and definitive action. Let’s respond to the gun violence epidemic with that same urgency and community approach to save lives.