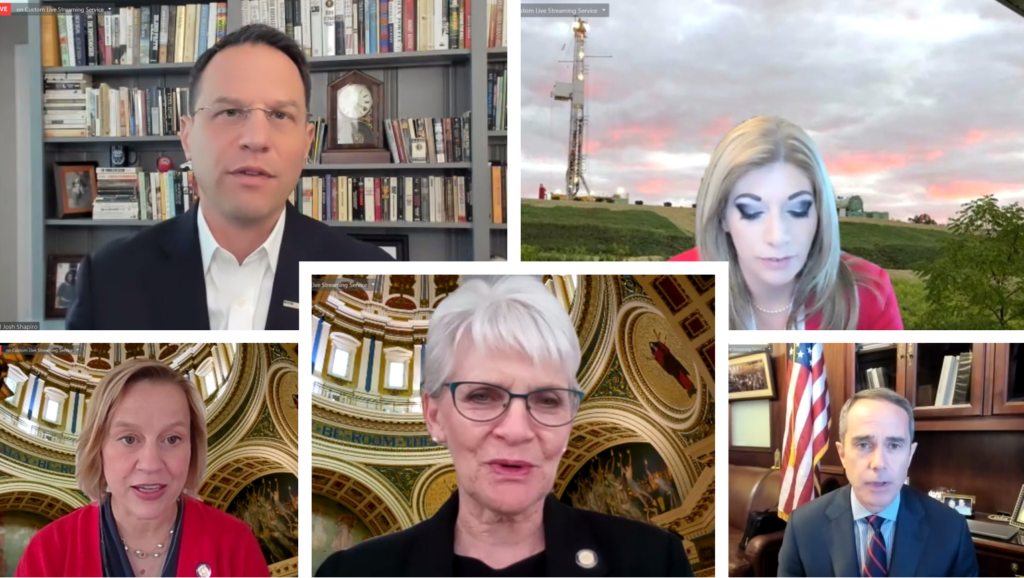 Harrisburg, PA − May 25, 2021 – Today, Pennsylvania Attorney General Josh Shapiro and members of the Senate Democratic Caucus led in this effort by State Senator Steve Santarsiero held a virtual press conference to discuss a package of bills aimed at increasing transparency, oversight and the overall safe management of gas drilling operations in the fracking industry.

The package of legislation addresses recommendations made in Pennsylvania’s 43rd Statewide Investigating Grand Jury report on the unconventional oil and gas industry. The report was a result of a two-year investigation that included personal testimony from 70 households across the Commonwealth and dozens of current and former state employees. Findings detailed disturbing health impacts of Pennsylvania fracking operations on children, homeowners and livestock that live within proximity of drilling sites. Multiple families close to wells or other industrial sites described unexplained rashes, sudden nosebleeds, and respiratory issues.

“Last year, the Grand Jurors called on Pennsylvania to make concrete changes to reduce the health and safety risks on a fracking industry left unchecked by regulators impacting families across Pennsylvania. It is common sense to ensure fracking isn’t happening next to a school or too close to someone’s home. It is common sense for companies to be transparent about the chemicals they are using near the water supplies of homes,” said Attorney General Josh Shapiro. “I want to thank Senators Santarsiero, Collett, Muth, Sabatina and Comitta for their work on these reforms—my office is committed to making sure Pennsylvanians are protected against powerful interests.”

The package of bills sponsored by Senate Democrats aim to usher in reforms that were specifically recommended by the Grand Jury report. The eight recommendations included:

Senators Santarsiero, Collett, Muth, Sabatina and Comitta will sponsor and co-sponsor bills that directly respond to the recommendations and the urgent need for action.

“Under this package of bills, citizens and others could report potential environmental crimes directly to the Attorney General’s office for investigation without having to go through other agencies first,” said Sen. Santarsiero, adding “This would speed up the process for investigations and convictions for environmental crimes and make it clear to potential polluters that damaging our land and water will be met with real consequences. Pennsylvanians have a constitutional right to clean air, pure water and the protection of the Commonwealth’s natural resources.  As a former Chief Deputy Attorney General for Environmental Protection in Pennsylvania, I have firsthand experience in how cumbersome, time consuming, and counter-productive the current process can be. It is time we ensure accurate resources exist to protect the constitutional right of all Pennsylvanians to clean air and pure water.”

“SB653 is a worker and public safety issue,” Senator Sabatina said. “When first responders show up to an accident scene, they need to quickly identify the substance in a spill. We have to keep truck drivers, first responders and drivers in Pennsylvania safe.”

“This package of bills should’ve been enacted before a single permit was approved by the DEP,” said Senator Muth. “For over ten years, Pennsylvanians have been left in the dark about the cumulative health impacts of the extraction industry and often have no idea what kind of harmful chemicals are being used right in their backyard or leaching into their water supplies. The recommendations included in report one of the 43rd Statewide Investigative Grand Jury Report are commonsense, proactive measures that will increase transparency about the hydraulic fracturing process. It’s time for state government to protect the people and our natural resources instead of protecting corporate polluters who only care about profits, even if it means harming people and the planet.”

According to data from the U.S. Energy Information Administration, Pennsylvania is the second largest producer of natural gas, following Texas. The industry has boomed in Pennsylvania with very little legal or regulatory accountability. Proposed legislation will address negligence, a lack of transparency and gaps in oversight that have allowed drillers to operate largely on their own accord, with profit often prioritized over children, families and animals that suffer because of exposure to dangerous chemicals, contaminated water and air pollution.

“In my district, where PFAS contamination levels have been among the highest in the nation, water quality is not something we take for granted,” said Senator Collett. “This urgent legislation will allow the Attorney General to take action against polluters and allow us to stop using state dollars – your dollars – to remediate hazards like these across the Commonwealth.”

“The health effects from industry activity are “magnified by proximity”, a fact that is highlighted in Attorney General Josh Shapiro’s Grand Jury report,” said Senator Santarsiero.  “We must protect our communities and keep families safe in their homes by increasing the distance unconventional gas drilling operations must be from buildings and water supplies.”

“The Attorney General’s report showed that natural gas drilling operations can have serious impacts on our health, safety, and well-being and those impacts are amplified by proximity. Drilling operations don’t belong in the middle of our neighborhoods or near schools, hospitals, or our water resources,” Senator Comitta said. “It’s time to enact safer setbacks to better protect Pennsylvania families, children, and communities from the potential for the significant, negative health impacts associated with fracking.”