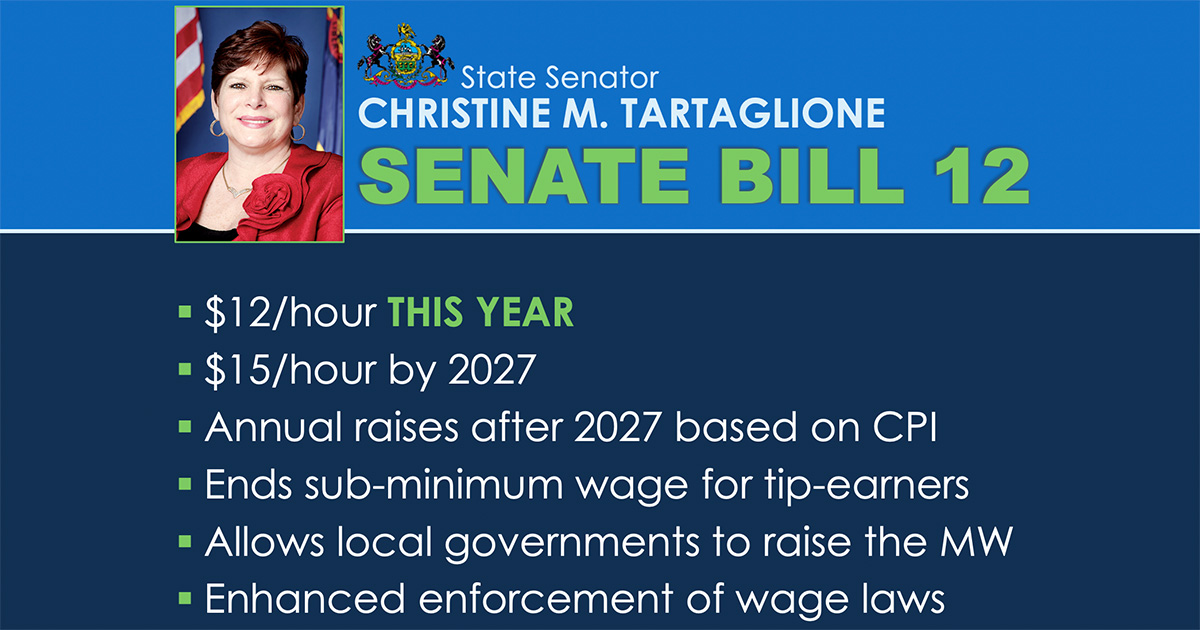 The forthcoming Senate Bill 12 would raise Pennsylvania’s minimum wage to $15 per hour, while the Raise the Wage Act of 2021 would boost the federal rate to the same level

During a virtual meeting with the news media, Senator Tartaglione announced she will soon introduce legislation that would raise Pennsylvania’s Minimum Wage to $12 per hour this year and put the Commonwealth on a path to a $15 minimum wage. The bill will be known as Senate Bill 12.

Congressman Boyle discussed the Raise the Wage Act of 2021 which was introduced in the U.S. House yesterday, January 26th. The bill proposes to gradually raise the federal minimum wage to $15 per hour and has garnered the support of U.S. House and U.S. Senate leaders. President Biden has called upon Congress to adopt a $15 federal minimum wage as part of his economic recovery plan.

“It has been 5,317 days since the Pennsylvania Legislature last raised the minimum wage. That is more than 14 years and it is far too long,” Senator Tartaglione said, echoing language she enters into the Senate record every session day. “At the current rate, a full-time minimum wage worker earns just $15,000 a year. That’s certainly not enough for anyone to live on – even a single person with no children or dependents. It is a poverty wage. Raising the minimum wage is not just an economic issue. It’s a moral issue.”

“No American who works full time should be living in poverty,” said Congressman Boyle. “Americans working 40 hours a week should be able to put food on the table and a roof over their families’ heads, but with the minimum wage stuck at $7.25, far too many are working hard and still in poverty. Even before the COVID-19 pandemic, the $7.25 federal minimum wage was economically and morally indefensible. Now, the pandemic is highlighting the gross imbalance between the productivity of our nation’s workers and the wages they are paid. Raising the federal minimum wage to $15 will be a boost to the economy, a boost to productivity, and a boost to our workforce. Raising wages is good business.”

On a state level, Senate Bill 12 would raise the minimum wage to $12 this year and an additional 50 cents each year until it reaches $15. After then, the rate would be adjusted annually based on the Consumer Price Index. In addition, Senator Tartaglione’s legislation would eliminate the sub-minimum wage for tip-earners (which is currently set at $2.83 per hour) and would repeal preemption, which prevents local governments in the Commonwealth from raising the minimum wage in their jurisdictions. Further, Senate Bill 12 would grant the Department of Labor & Industry more powers to investigate wage law violations and would increase the penalties for employers who violate wage laws.

“The level of support for these raises will only grow as consumer prices climb and it becomes harder for low-wage workers to make ends meet, and it becomes near-impossible for them to get ahead,” Senator Tartaglione said. “If New York, New Jersey, and Maryland can have a $15 minimum wage, and if Florida voters can approve a $15 minimum wage, surely Pennsylvania can do it.”