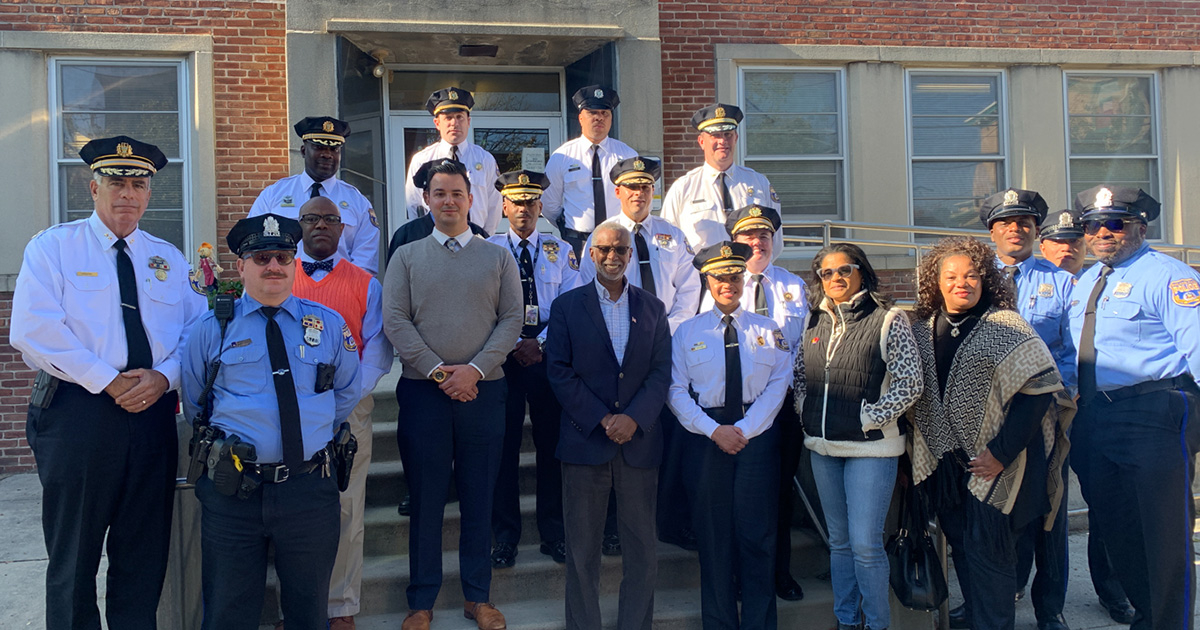 PHILADELPHIA – October 20, 2022 – Today, State Sen. Art Haywood (D-Montgomery/Philadelphia) joined Philadelphia Police Commissioner Danielle Outlaw and local leaders for a press conference to encourage the community to respect police officers. The event was held outside of the 14th district headquarters in the Germantown section of Northwest Philadelphia.

Considering recent attacks on police officers and residents in Philadelphia, the senator called for an end to senseless violence. In the past few weeks, a person wanted for homicide shot three SWAT team members in the West Poplar neighborhood and riders of dirt bikes and ATVs threw bricks and bottles at officers in Northern Liberties.

Sen. Haywood opened the press conference with a moment of silence for Jeremiah Wilcox of West Oak Lane, a 13-year-old shot and killed, and all gun violence victims in the city. On Oct. 10, a shooter gunned down Wilcox near 65th Avenue and North Smedley Street, while the eighth-grade student was visiting a friend. The senator encouraged the community to submit anonymous tips to the police department, which neighbors can do via an online form, email, or call to 215-686-8477.

As a constant advocate for gun violence prevention, Sen. Haywood recommended a two-fold solution to reduce violence in the city. First, he urged legislators to provide resources to effective community organizations. Second, he stressed the importance of coordination between intervention organizations and law enforcement.

The senator recently met with federal agencies, including the Bureau of Alcohol, Tobacco, Firearms and Explosives, Department of Homeland Security, Drug Enforcement Administration, Federal Bureau of Investigation, and United States Attorney’s office, who agreed to provide resources to reduce gun violence in Philadelphia. However, he insisted that these resources will only work if residents respect law enforcement.

“The support of our communities, of this community, and their voices, is absolutely critical and essential to the safety of our police officers,” said Commissioner Outlaw. “Senator Haywood, thank you for organizing this event in honor of all the brave women and women who are a part of the Philadelphia Police Department and other law enforcement professions.”

Commissioner Outlaw emphasized that law enforcement, as a profession, has made mistakes, but her department is working harder than ever to make the agency equitable and accountable. She also acknowledged the police department’s staffing issue and thanked the dedicated officers who ensure that the city is a safe place for people to work, live, and play.

“In today’s climate where there is rampant gun violence, crime and fear in our communities, we need to support our police officers who risk their lives daily while doing their jobs,” said President Hicks. “There are police officers who are our family members, neighbors and friends and it should be unacceptable that we allow those who have no regard for the law or taking a life to go unpunished.”

Mt. Airy CDC’s executive director was pleased to support the senator’s stance today. “Public safety is integral to quality of life for all residents in a thriving neighborhood,” said Philip Dawson. “Mt. Airy CDC commends the officers of the 14th Police District for their daily service to our community and businesses, and appreciates the sacrifice of all police who put themselves in harm’s way in the line of duty.”

The senator insisted that there are too many problems for the police to address alone and it’s important for the community and police officers to cultivate a strong relationship. “Without law enforcement, we will have lawlessness,” said Sen. Haywood.

According to Commissioner Outlaw, seven police officers have been shot in the line of duty in Philadelphia this year. Sen. Haywood condemned violence and disrespect towards law enforcement and encouraged peace. “Harassing or shooting police officers is unacceptable,” said Sen. Haywood. “We must show police officers respect, which is the only path to restoring peace in our communities.”

Video of the event is available at senatorhaywood.com/support-police-press-conference.