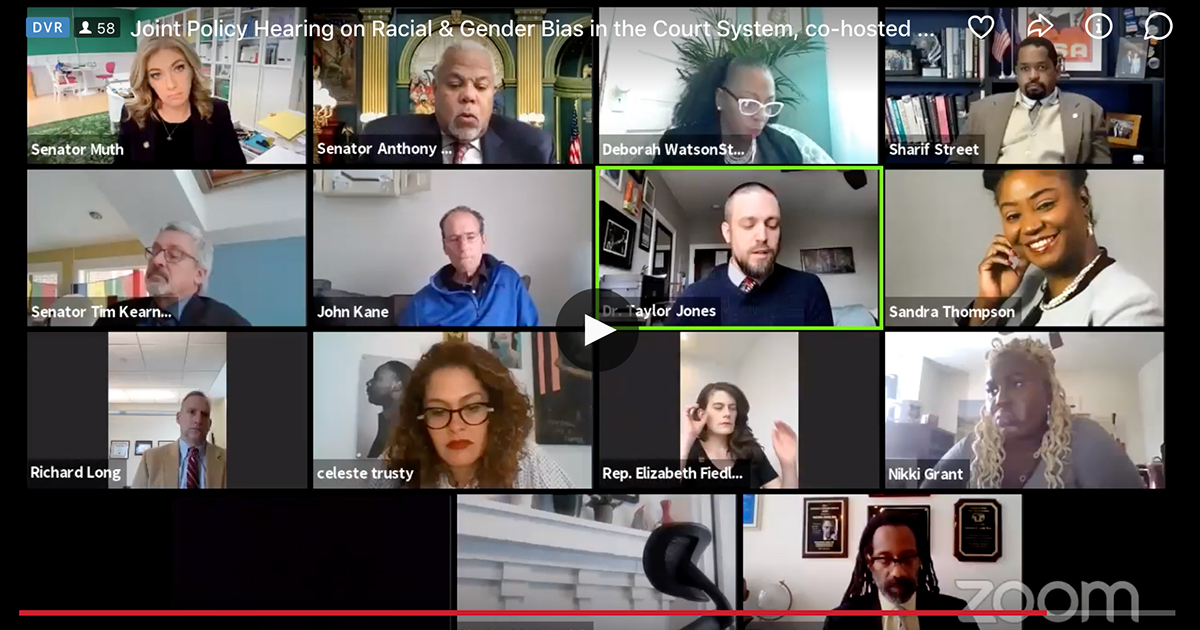 “Pervasive racial and gender bias in the Pennsylvania judiciary cannot be tolerated. This policy hearing not only gives us an opportunity to listen to personal accounts of bias and unfair treatment but to also gather information about the environment and systems that create and perpetuate these biases,” Bullock said. “As lawmakers, we have an obligation to take that information to advocate for comprehensive court reforms to address bias, systemic racism and other institutional challenges that threaten the public’s faith in our justice system.”

In 2019, the Center for Urban and Racial Equity (CURE) released an equity organizational assessment of the First Judicial District (FJD) of Pennsylvania. The report found that there was a culture of nepotism, mistrust, and racial tension within the FJD. These feelings were particularly significant among women of color.

President of the Court of Common Pleas in the First Judicial District, Judge Idee Fox, spoke at the hearing about what the FJD learned in the CURE report, and said that the decision not to immediately release the report was a mistake made it seem like there was something to hide. President Judge Fox said that the report is a “roadmap” on what the FJD can do better in regards to transparency and equitable representation in the courts.

“While it’s never been a secret to low-income people of color who live in neighborhoods like mine that justice is not blind, the Center for Urban and Racial Equity report made it explicit that we have a long way still to go in this space,” Williams said. “In order to restore faith in America’s justice system, especially for those who live in overpoliced and underfunded communities, we must work together at every level of government to erase any bias with respect to race or gender. Today’s hearing is about getting facts on the record to highlight the vital importance of addressing the concerns raised in the report and by those who have first-hand experience with racism and sexism in our judiciary.”

Notably, the CURE report found that among white judges and staff at FJD, there was a disbelief that structural and institutional racism played a part in modern society at all. Changes to organizational culture, hiring and advancement procedures, communication and decision making, programs and services, facilities and operations, and community engagement and partnerships were all recommended by CURE for the FJD.

Judge Karen Simmons testified about an incident that happened in her robing room in the FJD where she serves as a municipal judge. Judge Simmons said that note left for her was disturbing to her, and she is confident that it was left for her by another member of the court.

“I, as a sitting judge, received a racist, and misogynistic threat left in my robing room as I sat on the bench in my courtroom, what type of experience are the Black and Brown people of Philadelphia having when they enter our courtrooms?” Judge Simmons posed in her testimony.

President Judge Kim Berkeley Clark, of the Allegheny County Court of Common Pleas, said that the Pennsylvania state Senate can do their part in making sure that qualified and diverse candidates can be appointed to courts across the state when they make their judicial appointments.

Sen. Steve Santarsiero (D- Bucks), Democratic Chair of the Senate Judiciary Committee, said that he would make sure President Judge Clark’s recommendations were considered as the committee made future court nominations.

“There is no reason that we should be sitting back and waiting for change to just happen when we have a significant reports and testimonials from judges, staff, and those who have had to navigate the Pennsylvania court systems that race and gender bias are absolutely occurring and effecting every aspect of people’s lives and futures,” Street said. “I have advocated for many years, and will continue to do so, to implement immediate changes to our judicial system because it is women, Black people and people of color, and their families who are suffering the most.”

Celeste Trusty, Pennsylvania State Policy Director for the Families Against Mandatory Minimums (FAMM) said, “Pennsylvania has become one of the most incarcerated places in the country. Entrenched in our carceral culture, and even by design, is the fact that Black people and other people of color are disproportionately targeted and harmed by every step of the legal system.”

“Financial investment in indigent defense throughout the Commonwealth, financial incentives for courts to accurately collect and transparently report performance metrics, and racial impact statements to accompany pieces of criminal and youth justice legislation (are needed),” Keir Bradford Grey, Chief Defender at the Defender Association of Philadelphia, said. “Plain and simple the reason for the continued systemic disproportionate racial outcomes is because there is no accountability on a system that costs billions of dollars a year and has a high rate of return for those who go through it.”

Grey said that making sure defendants have the best representation in court as possible is also essential in making sure that individuals are not sent to jail with lengthy sentences just because they cannot afford or access adequate representation for themselves in front of a judge.

However, Sandra Thompson, an attorney who practices in the York, PA, relayed her experiences of bias in court as a practicing attorney. She said both she and other Black attorneys have actually been held in contempt of court by white male judges over their perceived unpreparedness in court, while this was not known to be happening to white attorneys arguing cases in front of the same judge.

Thompson, as well as Assistant District Attorney in the Philadelphia District Attorney’s Homicide Unit, Deborah Watson-Stokes, both spoke to how Black women attorneys are policed on their looks in the court room. Thompson said legislation like the Crown Act would help to fight against discrimination Black women face for wearing their hair naturally, instead of chemically treating it to be straight.

Guidelines for the disclosure of court reporter notes is also an essential aspect of removing systemic biases in the court systems, Thompson said.

“Bias is difficult to prove from the record, especially when the Judge controls the court reporter and the record. The record does not show tone, volume, or facial expressions. Under secrecy, a court reporter warned me that York County prosecutors and judges have a practice of requesting court reporters to change the record,” Thompson said.

“Being able to hold this hearing today with the Pennsylvania Legislative Black Caucus and elevating the stories of longstanding systemic racism and gender biases that have been harming communities and individuals for generations is one of the most important aspects of my job, particularly during Black History Month,” Sen. Katie Muth (D- Berks/Chester/Montgomery), chair of the Senate Democratic Policy Committee, said. “I encourage every single one of my colleagues to make racial and gender equity a priority in all of our state chambers and institutions.”

“We are proud to support the efforts of the Pennsylvania Legislative Black Caucus and Chair Bullock in examining this critical issue of fairness in our courts,” Rep. Ryan Bizzarro. Chair of the House Democratic Policy Committee, said.

Below are all who testified in today’s hearing:

The full recording of this hearing can be found at senatormuth.com/policy or on the PA Senate Democratic Facebook.