#GO100PA: A Renewable Future for Pennsylvania 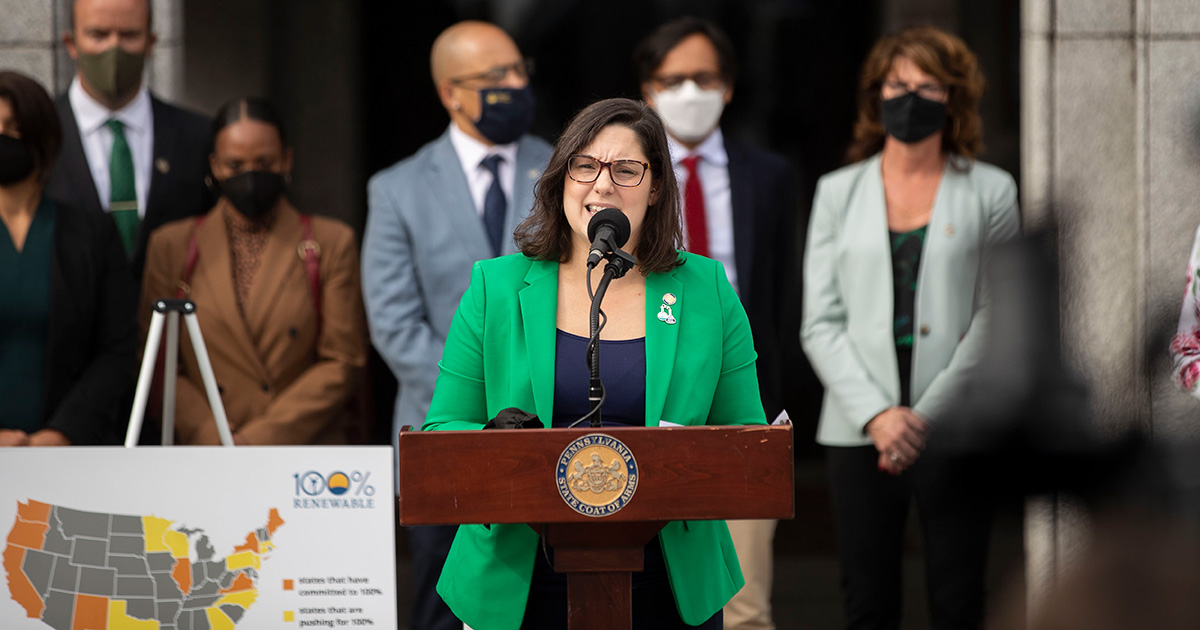 Harrisburg, PA  − September 21, 2021 − Senator Amanda M. Cappelletti (D- Montgomery, Delaware), Senator Katie Muth (D- Berks, Chester, Montgomery),  Representative Christopher Rabb (D-Philadelphia), Representative Danielle Friel Otten (D-Chester) joined Flora Cardoni, Field Director for PennEnvironment, in advocating for bold climate action now. The legislators and advocates were calling for “Go 100 PA,” legislation that would put Pennsylvania on track to reach 100 percent renewable energy by 2050. As illustrated by Hurricane Ida, which displaced hundreds of Pennsylvanians and caused over $100 million in damage, it is clear that the Commonwealth is feeling the effects of climate change here and now. These legislators put the responsibility on the legislature to act now.

“We have a responsibility to take action to protect the quality of life, not just for ourselves, but for future generations – and to do that we need to both stop the degradation of our environment now and implement policies that build a safer, greener future,” Senator Muth said. “Go100PA is a critical step in stopping further harm from global warming caused by fossil fuel industry pollution and ensuring a safe and sustainable future for Pennsylvania.  Urgent action is needed NOW, and I am honored to work with my colleagues in the House and Senate on this life- and earth-saving initiative.”

Already, 9 states representing more than 85 million people have passed similar policies, including New York, Illinois, Oregon, and Virginia. The sentiment of urgency was echoed by the Senator’s colleague in the Pennsylvania House of Representatives.

“Going 100% renewable is an existential imperative. Doing it justly is a moral imperative. And as legislators, it is at the heart of the oath we took to uphold our state’s constitution, one of only two in the nation that explicitly demands environmental stewardship,” said Representative Rabb. “Aggressive, creative and just climate action is the embattled bridge we must cross to the only future that allows humanity to persist in alignment with Earth, lest Earth relegates us to fossils from an era of unmitigated mass ecological destruction.”

Transition must begin now. The vast majority of Pennsylvania voters are concerned about air and water pollution. The legislators also voiced their concern for public health impacts of climate change.

“Our policy solutions must be long term and prioritize public health. Climate change’s very real effects are destroying our homes and health. Go 100 PA will provide the much needed framework for Pennsylvania to boldly address climate change and begin our transition to 100% renewable energy,” said Senator Cappelletti. “This is one of the biggest concerns of my constituents and I will continue to fight for investments in clean energy.”

Advocates agreed that constituents are asking for climate action.

“It’s time for politicians to stop listening to fossil fuel lobbyists who are holding our planet hostage with 19th century energy technologies,” stated Flora Cardoni, Field Director for PennEnvironment. “They need to listen to their constituents who want to tap into our 21st century solutions to climate change and move the Commonwealth to 100% clean, renewable energy.”