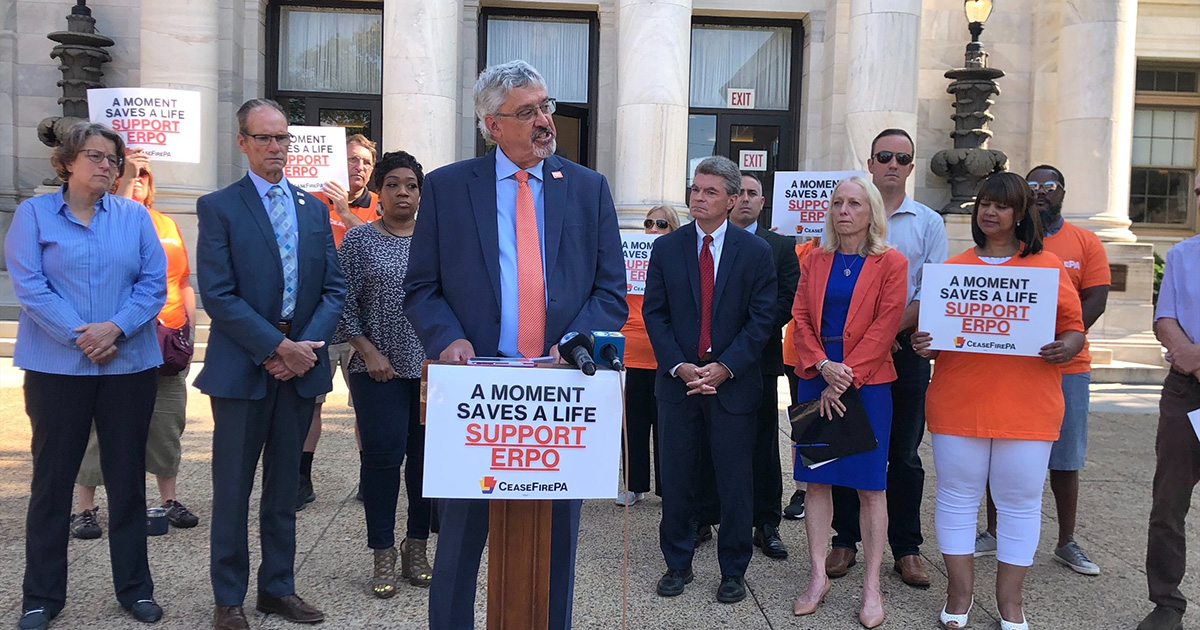 “Every day that Pennsylvanians wait for a proven tool to prevent gun violence, more lives are lost,” said Carol Lastowka, CeaseFirePA Southeast Coordinator. She cited a recent Third Way Poll showing 80% of Pennsylvanians support extreme risk protection orders–including 67% of Republicans. “We have the public support. We now have the money. And we have proof they work in 19 states. It’s time for Pennsylvania to get on board.”

Local lawmakers and gun safety advocates are urging the PA legislature to take advantage of the $750 million in federal funding made available through the Bipartisan Safer Communities Act. These resources could help law enforcement train officers, provide educational resources to community members and ensure effective use of the life-saving policy.

“Extreme Risk Protection or ‘Red Flag’ laws are a common sense step to keep guns out of the hands of people who could be a danger to themselves or others, but right now Pennsylvania has no red flag laws,” said Congresswoman Mary Gay Scanlon.

“Now that Congress has achieved bipartisan efforts to address the gun epidemic…it’s time the Pennsylvania legislature follows suit and uses the money offered in this legislation to pass and enact red flag laws,” said Senator Tim Kearney. “This is a preventative step we must take to protect someone experiencing mental health issues from using a firearm and potentially hurting themselves and others.”

“All too often in the wake of gun violence,” Scanlon said, “we hear that community members knew that a shooter was troubled and likely a danger to themselves or others.” said Scanlon. Red flag laws provide a civil mechanism to temporarily remove firearms–for up to a year–from owners who show warning signs they might hurt themselves or others. Once individuals prove they are no longer a threat, the firearm can be returned. In Indiana, they’ve saved a life for every 10 removal orders. In California, they’ve helped prevent mass shootings like those that devastated Uvalde, Buffalo and Highland Park.

This effective tool has the support of law enforcement. “Research clearly demonstrates that Red Flag laws work,” said District Attorney Jack Stollsteimer. “By keeping guns away from individuals who are a threat to themselves or others, we protect the community, while also protecting members of law enforcement. We must continue to invest in improvements to our mental health care system, but we must also work to pass common sense legislation such as a red flag law.”

Extreme Risk Protection Orders would also help prevent suicides, which make up the majority of gun deaths in the state, says Rep. Jennifer O’Mara. “I lost my father to gun suicide and I miss him every day. We knew something was wrong but we couldn’t do anything to help him,” she said. “This experience serves as a stark lesson that every act of gun violence is preventable. If a red flag law could help Pennsylvania families avoid tragedies like mine, we need to do all that we can to get this passed.”